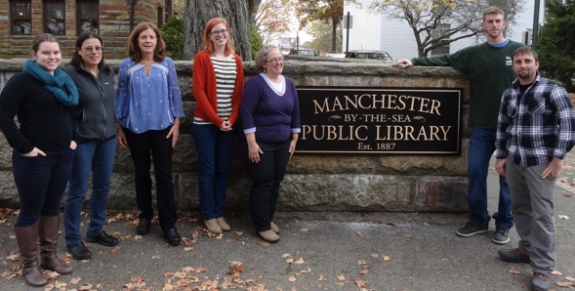 In the early eighteen hundreds, Manchester residents were eager to share literary resources. A “social library” was formed with some 150 volumes. This effort was short lived and a second effort was tried and failed as well. In 1830, the Lyceum Association, a group of men who met for regular lectures and debates on topics of interest, was founded. The Lyceum Library was an outgrowth of this association.

When the Lyceum Association disbanded in 1871, the collection was bequeathed to the town. It was moved to School Street and became the Manchester Free Public Library. Delucena L. Bingham Jr. was put in charge as librarian. When the collection outgrew this location, Mr. Bingham spoke of the need for a new library building and memorial hall. Summer resident, Thomas Jefferson Coolidge, gave the building as an outright gift to the town.

The building was designed by Charles F. McKim and built of New England ashlar stone. The building was dedicated in October of 1887, in three parts: the east room as the library, the west room as the headquarters for the Grand Army of the Republic, and the central hall as a war memorial to those Manchester residents who lost their lives in the Civil War. In 1927, when the last GAR veteran died, the west room was transferred to the library. As the collection and services grew, the central hall became used for the library. The only addition to the building has been the children’s room that was added in 1965.

In 1988 the Library joined the Merrimack Valley Library Consortium, which began the new era of on-line services. In 1996 three public terminals to the internet were added. The building was updated with new lighting and new carpeting also in 1996. In 2003 the library was air conditioned for the first time. The front doors were refinished by Crocker Boat Yard and the grounds were landscaped in 2004.

A two-part restoration of the building’s masonry was accomplished in 2005-2006. The first major renovation to the Circulation Hall since 1965, was done in 2006, thanks to the Friends of the Library.

2007 marked the 120th Anniversary. The Trustees announced a capital campaign to continue interior renovations. The Reference Room and the Reading Room were renovated as a result of that fundraiser.

The Community Preservation Committee funded the repointing of the Library’s exterior stone wall in 2013.  The wall’s original mortar was crumbling and the stones were shifting.

As the center of the community and in keeping with its mission statement, the Manchester-by-the-Sea Public Library continues to evolve as a place of discovery and enrichment for all patrons offering resources and programs for all ages. Each passing generation are stewards of this magnificent structure and will continue to care for it for future generations.